Full disclosure- this is not the first time I attempted this cosplay. No, the first attempt happened when I was a little weeaboo attending her first con (where I had a terrible time). The dress was ill fitting, my makeup was bizarre, and it was raining heavily so my hair was an absolute wreck. It was…not good.

Since then, I’ve mostly outgrown my anime phase. But I still have some fondness for certain shows and certain characters. Shaman King and Anna Kyoyama are prime examples. I still have a special spot in my heart for that show and that character. So when I needed to come up with a quick and simple cosplay for Akaicon 2016, I decided to give Anna another try.

Anna’s standard outfit is very simple- black dress, red scarf (sometimes worn as a bandana), and sandals. She also wears a blue bead bracelet and a white bead rosary. The beads were the easiest- I’d gotten those together for my first version of the costume and still had them in storage. They were both purchased at Claire’s; the rosary was completed with a wooden bead painted gold and a maroon tassel from the home decor section of Joann’s. The red scarf was the sash taken from my Kristoff genderbent cosplay.

Since I was on a time crunch, I pulled the shoes from my own closet. My Blowfish Garens don’t get a lot of love- I don’t wear heels very often- but they really are surprisingly comfortable! Sure, they’re not exactly like Anna’s slide style sandals, but they worked in a pinch. 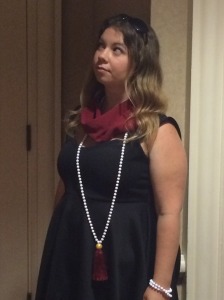 The dress was ordered off of Poshmark. Anna’s dress is deceptively simple, but the skirt is definitely flared, so I scoured all my usual haunts for a possible contender- eBay, Amazon, Modcloth, Forever 21. On Poshmark I discovered this super cute scuba knit dress from Boohoo with the tags still on, got a great deal on it, and it arrived just in time! It’s slightly too big at the top, so I’m planning to take it in a little (when I remember, which, let’s be honest, I don’t until I pull the dress out of my closet to wear again).

I opted to go without a wig, which, yeah…usually a cosplay no-no. But this was such a simple costume and I was pretty much only wearing it on Sunday for closing ceremonies, so I didn’t mind too much!

Plus I got some pretty cute pictures with the Akaicon mascot, Jackie (who just so happens to be my sister).

One thought on “Anna Kyoyama from Shaman King”