I auditioned for this cabaret on accident.

The company was holding a joint audition for both Heathers and the cabaret at the same time; I only planned on auditioning for Heathers since I had a conflict right before the scheduled date for the show. Better to not audition for a show when you know there’s a conflict than jumping into a mess, right? (I once went to an audition where the director saw that the auditionee would be gone for the whole week before tech week and he told her basically that she could audition but she wouldn’t get cast. Yikes.) But I came in and I sang for the (large group) of directors, and one of them is a friend of mine and she was like “Why didn’t you write down you wanted to audition for the cabaret?”

“I’m putting you down anyway.”

I got a callback for the Nerd Girl and one of the hosts, and lo and behold, I was cast as the Nerd Girl. I’m definitely never typecast ever, right?

The songs were more of a challenge than I expected because, for the first time ever, I was singing as an alto in the group numbers instead of a soprano 2. As a soprano 2 I typically have some harmonies here and there, but an alto is straight up just singing harmonies. And let me just say, I do not naturally have an ear for harmonies. Your girl had to WORK for this. But at the end of the day, it was really rewarding. I got to sing in a less-utilized part of my range (I have a really strong lower register and didn’t realize it!) and I got to learn a lot of techniques I wouldn’t have learned otherwise. So lesson learned- yeah, I was really nervous at first, but it was great.

I didn’t do much in the first half of the show, since the guys were singing for most of it, but I did get to sing in the “doo-doo-doo”s for “Hey Good Lookin'” (from Dogfight). But then I didn’t do anything else until halfway through the show for “The Money Song,” so most of the time I looked like this:

(Snapchat courtesy of Rachel, who played the Princess bachelorette, and was just as bored as I was)

The three female bachelorettes were introduced using the song “I Know It’s Today” from Shrek, and this meant I got to achieve one of my life goals of singing the Medium Fiona verse. Seriously, that’s all I want. Cast me in Shrek and let me play Medium Fiona and a fairy tale character so I can sing “Freak Flag,” I’ll be happy as can be. Anyway, I got to sing my favorite part in that song and I was just like YES BLESS EVERYTHING.

The improv was very hit or miss. I could play off of one of the hosts really easily, but not so easily with the other one. So kind of frustrating, but sometimes it was super rewarding. Also, admittedly my improv skills are kind of rusty. I feel like I should take some classes. Anyway.

My big solo number…was a song I’d never heard before. I’ve listened to a lot of musical theatre, trust me, but I’d never heard of this song. And it was a challenging one for me, because by the end of the song I was supposed to unbutton my nerdy Her Universe Ewok cardigan and show off my (very modest, very unrevealing) bra to the audience. (I thought I was too shy and retiring to show off my bra to an audience. And then two months later, Evil Dead…)

Anyways, confused? Listen to the song and it’ll make sense.

It’s great, right?? I had such a blast once I got comfortable with it. It went straight into my audition book, I can tell you that much.

(this picture was from a rehearsal so I’m not in my amazing unicorn skirt and my hair is a mess, but please enjoy my quality facial expression.)

The big problem was that after the bachelor contestant from the audience picked his winner, the two losers had to sing a duet. Good news: it was “Secondary Characters” from [title of show], which is an amazing and hilarious song. Bad news: remember when I said I struggled with harmonies? Yeah, this was not a great time for me. I won for one performance so I didn’t have to sing it that night, but I lost the second performance so…well, it was underwhelming. It was all right. It could have been worse. Let’s just say I learned a lot.

The finale was “Burnin’ Love” from All Shook Up, the Elvis jukebox musical, and that was a lot of fun. The choreography was a lot of fun for that one especially, and my solo bits were super great. 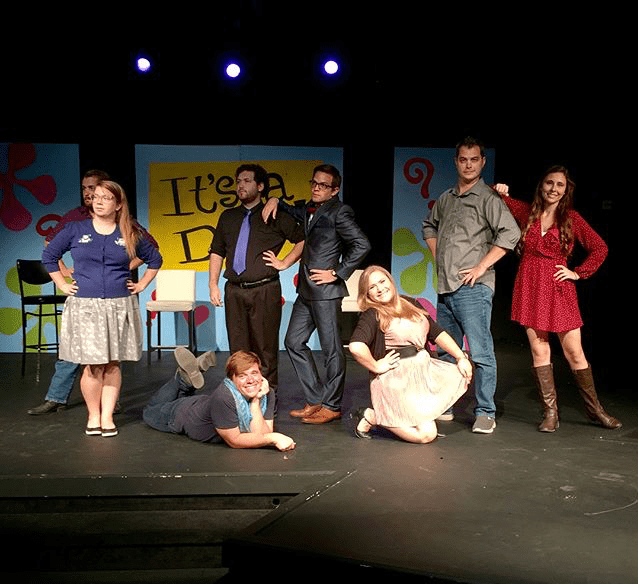 All in all, I wasn’t expecting to be a part of the cabaret at all, but it turned out to be a lot of fun and fairly low key, all things considered. I also got to wear my favorite cardigan, my pink party glasses, and a gray and silver unicorn print skirt, so this was a win win all around!

One thought on “It’s a Date! (my first cabaret)”