It only took seven months, but I finally edited my Evil Dead vlog! I hope you like this peek into our backstage shenanigans!

I absolutely *love* what’s in my bag videos. I’m not sure why, but I do. So I filmed one of my own!

This is what I carried in my performance bag for Evil Dead 2.0, but I filmed this right before the last weekend, so you’re getting a great look at what an actress looks like at the end of the run versus the perfectly packed bag at the beginning.

Question for you- what do you carry in your performance or rehearsal bag? If you’ve made a video, send me the link, I’d love to see it!

Here’s a little behind the scenes, mostly from the first week of rehearsals for Evil Dead! You even get to hear me sing a little bit in this one!

(all photos in this post are from Chris Bishop Photography!)

In 2017, I played my boldest role yet: Cheryl Williams in Evil Dead the Musical. You can read all about that first adventure here! 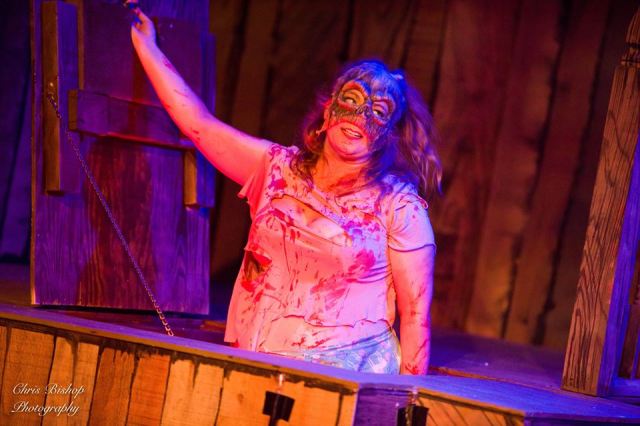 The show was a huge hit for our theatre the first time around, and not only did patrons want to see the show return, but most of cast wanted and was able to come back. I reprised my role and so did our Ash and Jake, but we had an all-new Scotty, Linda/Annie (this time the roles were combined), and Ed. We also had a new fake Shemp (this actor plays a variety of roles including an Evil Tree and Annie’s Ghost Dad) and this time my boyfriend Shane joined me onstage for the first time!

I was honestly so excited to come back as Cheryl. It’s my favorite role I’ve ever played, and I feel like the two years in between really gave me a chance to work on my voice and my stage presence, so I think I was even stronger this time around. Plus, I was definitely a lot less nervous of dancing around in my bra onstage. 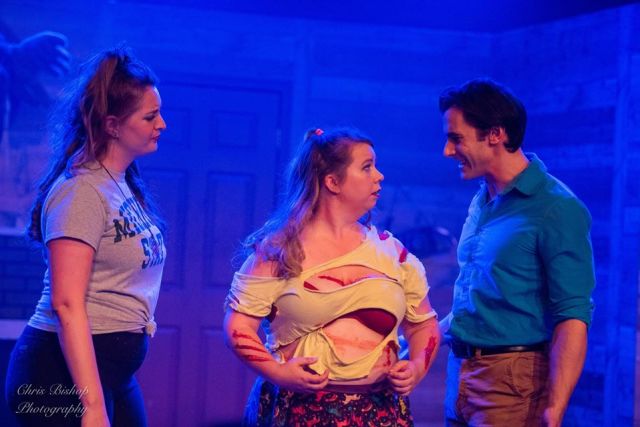 We had a pretty short rehearsal process, but a lot of it was getting the new actors caught up to speed and cleaning up what we’d worked on before. It’s interesting to revisit a role- I really focused on how I could improve my performance from the first time, which funny bits to keep and which things to try differently. It really helped to work off of some new actors though! Jeffrey, who played Scotty, played the role completely different and gave me so many different choices to work off of.

I made a new costume this time around! Still with unicorns, though. I kept the same jacket and hairbow too, and the Glee messenger bag, since those pieces seemed so completely Cheryl to me, but I got new sneakers (the old ones never fully recovered.) You can tell that I tried out two different shirts- the lime green was the winner, even though it rapidly got more and more tattered as the show went only. Although maybe that was a good thing! I also sacrificed my old extensions  and wore them for this show- they are now exclusively my Cheryl extensions (I’m really really hoping to play her at least one more time in my life.)

I also made Annie’s tearaway dress! It was definitely not perfect at all and I wish I’d had more time to really nitpick it, but the reality is that we were constantly fixing it before each performance. But that’s what happens when you tear, bloody, and wash a dress over and over and over again, I suppose!

What helped this time around it that we didn’t do a 7pm and an 11pm show again. That was way too much for me! Cheryl is a super demanding role, particularly for act 1, and being able to run and scream and belt like that for two shows back to back was ex-haust-ing. We stuck Friday, Saturday, and Sunday night performances instead and it was perfect! 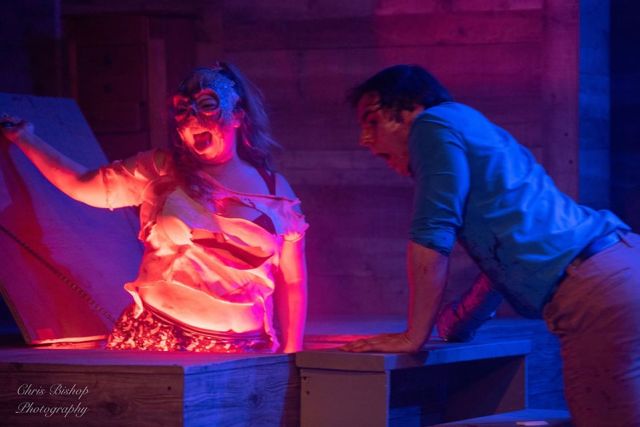 I absolutely loved bringing my favorite stupid bitch to life again (Broadway World called me a “lovable scene stealer”!) and I hope I get at least one more change to play her. That being said, I filmed a whole bunch during our run, so stay tuned if you’d like to see more antics from the cabin in the woods!

(Want to see more of my 2017 Evil Dead shenanigans? You can watch them here!)

Everything right now is kind of blah, what with the goings on, and it was a great motivation to finally edit and post this vlog of my 2019 Halloween party experience. I absolutely love Mickey’s Not So Scary Halloween Party (I’ve posted about it quite a few times over the years) and this year was just really delightful- great weather, a cute (recognizable) costume, and some great time with my family.  We also visited the Food and Wine Festival, Galaxy’s Edge, and the Grand Floridian for tea!

I’ll post more in depth about my costume later, but for now I hope you like the vlog!

It took months, but I finally edited and posted my vlog about performing in Noises Off! I had a blast with the show and ended up getting a really nice review of my performance in a local paper, which was super exciting. Let me know what you think of the vlog!

(want to see me audition for Noises Off? You can see that too!)

At the end of 2019, I made a video recapping what all went on that year!

And then I made a video all about my goals and hopes and dreams for 2020!

and…I write to you now in quarantine.

Oh, boy. Well, it’s only May, and a lot can happen in the next six and a half months. I’m looking forward to seeing where I’ll be by then!

reader, I married him
Are we exhausted post wedding? Yes. Was it possibly a bad idea to do two park days in a row? Probably. But is it super sweet to visit the place where we first met the day after we said I do? Definitely. #iloveyou_insco
I like shiny things, but I’d marry you with paper rings ❤️ #iloveyou_insco #2022bride
I’m usually pretty good with words, but today I am just so excited to marry my best friend, the love of my life, the handsomest and funniest man in the world. let’s get married!❤️#iloveyou_insco
When you pick out some of your favorite books for your Anne of Green Gables inspired engagement pictures, and the prettiest cover gets chosen for the close up pictures. And then right before your wedding the author announces her next book is coming out next year! (You can add book preorders to a wedding registry, right?)
In two weeks we’ll be married!!
Less than a month till the wedding and my brain is soup. But we look so cute!!
We’re down to 40 days till the wedding! We celebrated our sixth dating anniversary with Salt and Straw and our first visit to Boma. (But we’re already planning to go back- it was SO good, and I got to see waterbucks). #2022bride #iloveyou_insco
Anne reveled in the world of color about her.
We’re starting a Lumineers cover band, I’ll play the Appalachian mountain dulcimer and he’ll play the harmonica.
When you tell your photographer you were thinking of an Anne of Green Gables vibe, and she instantly knows what you’re thinking.
We took our engagement pictures today and I’m so excited to see them!! #iloveyou_insco #selkie #greengables
Five years ago today I blew up the bank across from the sheriff’s office for the last time, and then started my journey at the Harambe Wildlife Reserve. Today, exactly five years later, I’m taking my last safari before starting a new adventure!
Happy Mother’s Day to my favorite mom in the whole world!!
Happy #maythefourthbewithyou ! Remember when I worked at Star Tours, but then I crosstrained and only picked up shifts on occasion, and then the new kids would panic because “little Caitlin” didn’t have a trainer? Good times. #88789
We guarded some galaxies! So far we’ve gotten September, One Way or Another, and Disco Inferno, but Shane is still hoping for Tears for Fears.
Happy birthday to the Hollywood that never was but always will be, and my favorite journey into the movies. There’s no place like home. #greatmovieride #disneyshollywoodstudios #disneycastmember #disneycollegeprogram #wizardofoz #dorothygalecosplay
We got engaged a year ago! And we discovered the hard way that we don’t know how to pose for photos together. #iloveyou_insco #2022bride
I said yes to the dress!! (and no, it’s not any of the dresses behind me) #tdrrealbride
#tenyearchallenge