Charlie Brown had always been one of my top choices to direct when I started teaching- it’s a really accessible show, fairly simple to sing and simple to stage. So when I was working for a school that wanted to invest as little as possible in its arts program, it was a solid choice, especially when I found out they had done it about five years earlier and we had some key costume pieces in storage! Life was a lot easier when I realized that Schroeder, Charlie Brown, and Linus already had their shirts.

While the show only has a few cast members originally (Charlie Brown, Linus, Lucy, Sally, Schroeder, and Snoopy) I decided to expand the cast to include more kids. Because that’s what needs to happen for a middle/high school production, especially when there’s only two shows a year and you want to give as many kids as possible a chance to be part of a performance. Woodstock was added (a nonspeaking role for literally the most precious second grader you’ve ever seen) along with several other birds from the elementary school, and then an ensemble of older kids that, while they didn’t have lines, were all chosen from Peanuts characters- Peppermint Patty, Frieda, Patty, Marcy, Violet, the Little Redheaded Girl, and Pigpen. Most of my kids had minimal to no stage experience, but they were absolutely fantastic. All of them hard workers, all of them super eager to learn, and it turned out to be a great production. If it hadn’t been for the garrulous music teacher (which is a whole ‘nother story, but for reference please picture the Queen of Hearts from the animated Alice in Wonderland and you’re just about there) it would have been perfect.

The boys were very easy to costume. Since, for the most part, their shirts were pulled from storage, it was a matter of them bringing in the right shorts and sneakers from home. Pigpen had a brown shirt that he brought from home as well, but again, super easy to get. My philosophy (pun accidental) when costuming is to either make everything my cast needs, or have them bring in items they already own; I don’t like sending my actors to buy costume pieces. Which is what made it even more miraculous when my Charlie Brown found a pair of yellow and black striped pajamas that worked perfectly for the opening number.

Snoopy’s costume was also fairly simple. I didn’t want to do a full body dog costume, so Snoopy wore white pants and a white shirt with a black and white baseball cap. With some slight makeup (mostly the black nose) he was perfectly believable as Snoopy. For the Red Baron sequence at the top of act two, he added goggles, a flight cap, and a white scarf pulled from my sister’s costume collection.

The birds were also very simply costumed- yellow shirts, black shorts, and sneakers. Woodstock also wore a yellow tutu and we tied yellow ribbons in her pigtails. She was literally the cutest.

Sally and Lucy were slightly more tricky. A lot of productions try to copy the comics exactly and put their actresses in drop waisted dresses with short skirts that stick out like hula hoops. I ended up putting them in more 50s style fit and flare dresses, mostly because I had Sally’s dress already! I played Janice Vickery in The Effects of Gamma Rays on Man in the Moon Marigolds in college and made my own costume, a pink and white polka dot dress with a half circle skirt and a peter pan collar (I used Simplicity 4116, which has been out of print for quite a while, but it’s pretty easy to find comparable patterns). To make it work for my Sally, I took the dress in and made a sash and a hairbow; with frilly ankle socks, pink low top converses, and a small petticoat, it was perfect. I wanted Lucy in something similar, so I used McCall’s 4948 (their Alice in Wonderland pattern) to make a plain blue dress with puffed sleeves and a circle skirt, but I eliminated the peter pan collar to keep it looking more like Lucy and less like Alice in Wonderland. The school’s powers-that-be thought the skirt was too short (despite all my actors in skirts wearing shorts under their costumes) so I added a ruffle to the hem. I made two bows to match, and then added a petticoat, frilly ankle socks, and saddle shoes.

The other girls in the ensemble wore outfits reminiscent of their characters in the comics, mostly by colors. Peppermint Patty wore sandals, a sports jersey, a backwards baseball cap, and drawn-on freckles, and Marcy wore a sailor dress and Harry Potter glasses. Violet wore purple, Frieda wore red (and had naturally curly hair!) and Patty wore an orange and gold plaid dress that I had previously used when I directed David Ives’ Words Words Words.

The most unique part of my production, in my personal opinion, was adding the Little Redheaded Girl, the object of Charlie Brown’s affections. I had a redheaded student that I costumed in a white dress and a pink floral print cardigan, and incorporated her into the group scenes. She was there when Charlie Brown did his lunchtime monologue, and she skipped past him during the baseball song. My favorite part was the very end, when he’s holding her pencil at the end of “Happiness.” All the other actors had already left in twos and threes, and he was alone onstage with the pencil. It’s scripted that Lucy gives the final line, but instead I had the Little Redheaded Girl tap him on the shoulder and hold out her hand. He gave her the pencil back, she said “you’re a good man, Charlie Brown,” and then took his hand to walk him offstage. It was such a sweet moment and a great ending to the show!

oh my gosh BLESS YOU those kids probably felt like they were in HP for just a moment there !!!

…then we would start after school rehearsals and I would be barefoot with my hair held up in a pencil.

(I miss teaching my class and I miss my kids and I miss directing but I don’t miss the politics of schools.)

#tbt to those days when I was a teacher and directed The Lion, the Witch, and the Wardrobe and accidentally had to play the Centaur. It makes me miss my nerd herd.

when I was teaching my students learned that I would answer faster if they called for “mommy.”

my prof brought a lightsaber to class wtf 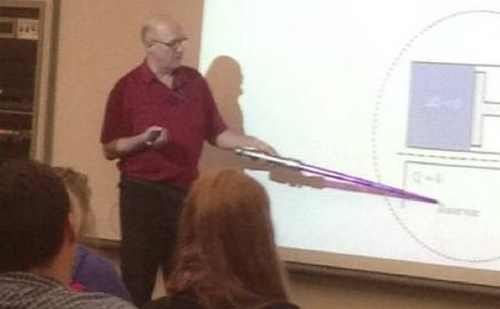 I once taught a class while wearing Hogwarts robes.

(It was really cold and I couldn’t find my cardigan.

I miss my babies.

Sometimes when I’m sad I remember that one of my favorite students said that this is how he pictured me every time the administration did something shitty.

teresashortcake replied to your post:You mentioned teaching horror stories. If you could mention a few others that would be awesome. Then I have something reasonable to rant at. Maybe awesome isn’t actually the right word, but I think it gets my point across.

please tell me you were at a private school because that is insane.

I was. No school board to answer to, so they did whatever they wanted. And the headmaster was an ass, so he did a lot of terrible things.

-I was a theatre arts teacher with no budget. Absolutely none. In fact, my budget was so small that when I came to the headmaster saying “okay, rights for the fall show are going to cost X amount” he nearly hit the ceiling. TURNS OUT THEY HAD NEVER PAID THE RIGHTS FOR ANY SHOW EVER. When they performed Annie for a summer camp the year before, they had literally just copied the script from the movie and performed that.

-The headmaster knew the names, family members, and general backgrounds of every kid on the football and baseball teams. He came to one performance of the spring musical and texted the entire time.

-The school was so totally anti-gay that when I cast a particular student in the fall play, the MS/HS principal came to me IN THE MIDDLE OF CLASS and told me that if “[student] is acting too gay, his mother has instructed that you tell him to stop and be a man.”

-Since it was a Christian school, they were VERY strict on dress code. My usual outfit was a dress, leggings, cardigan, boots. All day every day. And at least once a week, I would get a “talking to” about my clothing. Why? Because my skirts didn’t cover my knees. My knees weren’t even bare. They were just knees.

–bonus story: when I told them I couldn’t afford new clothes on what they were paying me, I was told “just go ask some of the other female teachers for their hand-me-downs.”

–I directed the fall and spring shows

–the director of the MS/HS aftercare program

and I was paid *drumroll please*

for working at this school

Not counting weekend rehearsals, and lesson plan prep, and all the extra work that goes into teaching.

And it was an hour there and an hour back from my home.

I shall leave you with one of my favorite stories from my two and a half years of hell.

We had an end-of-semester teachers’ lunch on our in service day before everyone left for Christmas break. They brought us Cracker Barrel food…

…which had been left over from someone else’s church function. Two days earlier. We weren’t even worth fresh food.

But we all chipped in and got the headmaster an iPad mini, so that was nice. It matched his iPad, and iPhone, and Mac computer. And when he explained that our Christmas bonuses weren’t going to be as good this year, he told us “in the big picture, it doesn’t really matter, because you’re doing this for Jesus.”

Yeah, I’m never going to be a teacher again.

The faculty. That was seriously the worst part for me. The headmaster was a stingy and heartless jerk with a perma-smile, most of the other teachers treated me like crap, and the teachers who were kind to me didn’t have much power to help me improve how I was doing at the school.

If you’re in a job you truly love, you can deal with some of the difficulties it gives you. Like right now I deal with grumpy tourists and the heat but I love Disney so much and there’s so much potential for me and I’m so happy to be here. With teaching, I adored my kids but hated every single other aspect of the job. So for me, it wasn’t worth it. But you never know- maybe teaching will be the right place for you!