Before I costumed The Wedding Singer…I actually hadn’t listened to any of the songs from the show. Oops. I had seen the Adam Sandler movie, ages ago, but I had some research to do for the production.

Wedding Singer is a super cute, super lively musical about a (duh) wedding singer and a waitress who fall in love, even though he’s not over his ex who left him at the altar and she’s engaged to a (really awful) CEO. It’s an incredibly high energy show from start to finish, and it’s set in the 1980s, so clearly that makes it a lot of fun.

I just didn’t have any idea how challenging this show would be to costume! Here are just a few of the problems I ran into:

-a huge cast! There were about 25 people that needed costumes. Not only that, but each lead had an understudy, plus all of the ensemble members had multiple costume changes.

-minimal budget and no wardrobe to pull from! This production was done through the Stage cast club, which is for Disney cast members, so we didn’t have a specific theater that belongs strictly to us. The show was actually performed in the Ballroom of the Americas in the Contemporary resort. So you can see how it was an interesting set up from the beginning.

I pulled as much as I could from Goodwill and from the actors’ wardrobes, but I did end up making a lot of specialty pieces. 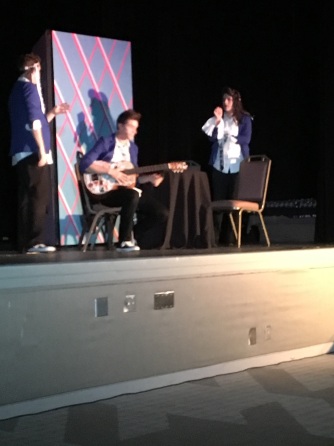 One of the actors actually found the iconic blue blazers online! They weren’t exactly, uh, the best craftsmanship, but it was easier to alter these guys than sew blazers from scratch. The director also found the piano ties on eBay. George’s top was a ladies’ blouse from Goodwill and I added copious amounts of ruffles.

Robbie also had some pretty sweet parachute pants “that his grandma bought for [him].” They were actually tracksuit pants with extra zippers attached.

The ensemble for “All About the Green” needed to be identical, so there were about ten navy dirndl skirts. Yikes. Luckily, one of the cast members, Madison, was an absolute angel and helped me with a lot of projects, including this one.

The impersonators posed a definite challenge- Mr. T, Billy Idol, Cyndi Lauper, Imelda Marcos, and Ronald and Nancy Reagan. Nancy’s dress and cardigan was already in her closet; Ronald and Imelda got their outfits from Goodwill with some alterations. Mr. T and Billy Idol pieced their costumes themselves (with some extra fringe stitched carefully to Billy’s vest). Cyndi was the biggest challenge. I pulled a cute Betsey Johnson dress from my closet, added some multicolored tulle left from Holly’s skirt (you’ll see in a second), and we added a lot of accessories. A lot. Unfortunately the zipper popped during tech week! We had to replace it at the last minute. But it worked! 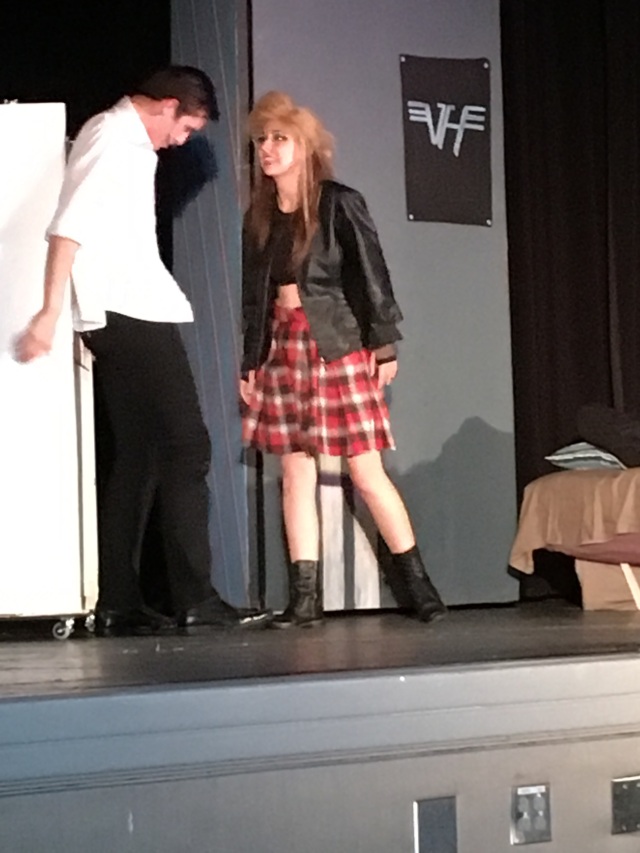 Linda, Robbie’s ex-fiancee, also got a great pleated skirt. I made it without a pattern and it worked out really well, especially with the leather jacket.

There were also four wedding dresses used in the show! One was donated to the production- a truly massive 80s satin nightmare. I also donated a wedding dress from my own closet for the bride in the opening number; the crinoline was cut out to make it easier to dance in, and I added a set of massive puff sleeves. 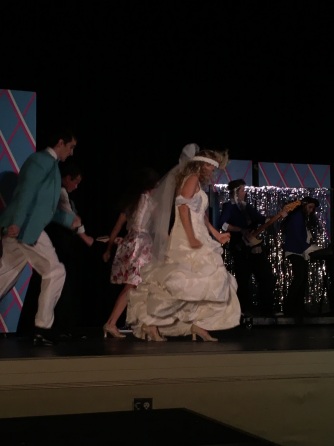 The bodice of Linda’s dress was sewn from an out of print McCall’s pattern, 5580. It’s a simple bustier pattern that I made from muslin with a lace overlay. The skirt was also muslin with a lace overlay, and then a truly bonkers high-low hem tulle skirt. It moved so well during Linda’s act one number, and with combat boots and a silver belt it was perfect. (And that wig…just look at that glorious wig.) 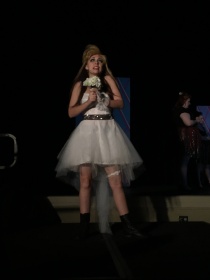 Julia’s wedding gown was a super important project for me. She’s the female lead and the object of Robbie’s affections, so it was important that her wedding gown was as simple, sweet, and lovely as she is. My friend Molly played the role with the perfect balance of sweetness and quirkiness and it was so fun making her a gown. I used an actual 80s formalwear pattern that I found on eBay, Butterick 5965, but I made the skirt long and full. The dress was lined in muslin (no budget to be had!) with a layer of satin over it, and then a layer of very soft tulle over it. It actually wasn’t even tulle- technically it was mosquito netting. But it draped beautifully and it looked so soft and dreamy. The dress itself is very simple, but I made sure it fit her well, and I added a rhinestone trim (also from the 1980s- it was actually vintage!) so that Robbie’s question about “is that bedazzling?” made sense. She wore it with a veil from my closet and a petticoat, but there wasn’t a train to make it easier to dance in. 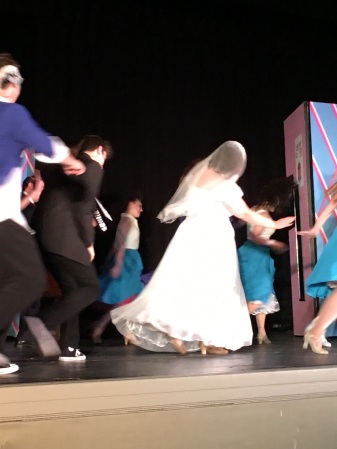 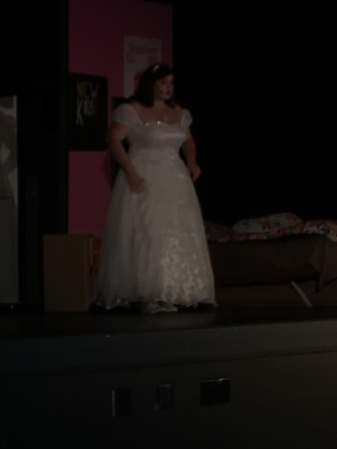 (you can also see the super cute bridesmaids’ skirts that Madison whipped up!)

Holly, Julia’s cousin, had one of the most challenging costumes. For most of the show, she wore an IMMENSE poofy skirt. It was made of three layers of pink organza, with multiple layers of tulle circle skirts in a rainbow of colors. It was so time intensive to make, but isn’t the final result great?

But guess what! That isn’t even the final result! Under that skirt, Holly is wearing a mini dress made of pink swimwear material! See, at the end of act one, Holly pulls a Flashdance and does the whole pull-the-chain-and-the-water-comes-down bit. She needed a dress that could get wet and be completely dry by the next performance. So you see that fancy tulle circle skirt? Yeah, it’s actually a tearaway! It fastened with two extremely sturdy magnetic snaps at the waist so she could pop it off, and underneath was a pink minidress made from McCall’s 5580. If I could do it again, I would make my own bias tape from black spandex rather than using the woven premade tape, but it still worked out and she looked great. (“Like a fairy godmother…only slutty.”)

Wedding Singer is a complicated show to costume even without the constraints I had, but overall it was a great show- definitely one of the most high energy and dedicated casts I’ve worked with! I’m glad I had the chance to make them look good onstage. And I can’t wait to costume the show again this spring!