It took months, but I finally edited and posted my vlog about performing in Noises Off! I had a blast with the show and ended up getting a really nice review of my performance in a local paper, which was super exciting. Let me know what you think of the vlog!

(want to see me audition for Noises Off? You can see that too!)

I think most of the time people consider straight plays to be easier than musicals. And to some extent, I think that’s correct. Musicals have all that singing and dancing and whatnot. But I think Noises Off could give a musical a run for their money. 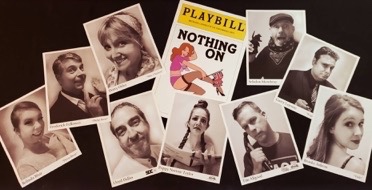 Noises Off is a farce, a very zany play that involves a lot of running around. In act one, the cast of Nothing On is in their final rehearsal and everything is going horribly wrong. In act two, it’s a performance in the middle of their tour and everything is in even worse condition- especially since now the set is turned around and the audience is watching the pantomimed antics backstage. And in act three, it is the final performance of the run and nothing at all is going the way it should.

I auditioned not knowing which role I should go for- Poppy, Dotty, Belinda, or Brooke. I was lucky enough that the first or had me read for all four roles multiple times. (I actually filmed my audition prep process if you’d like to see it- comment below if you think I should post it!) In the end, I was cast as Belinda.

(Side note: my costume might look familiar. It’s part of my Dapper Day Elinor ensemble!)

I’ve done some challenging shows in my day, but this was probably the most fun challenge I’ve experienced in a while. The first hurdle was that I missed the first two weeks of rehearsal because of A Chorus Line- but the director knew that before I auditioned and cast me anyway. (Always post your conflicts on your audition form!)

The hardest part for me once we got into rehearsals was remembering which cue lead to which line. Belinda’s bits tend to be non sequiturs, so there isn’t a good set up to trigger the next line of dialogue. And since all three acts follow a similar structure, the same cue line in all three acts could lead into completely different responses. I literally made myself little cue cards to keep in my skirt pocket to prompt myself through tech week. I was fine without them once they opened, but the sense of training wheels has been very reassuring. 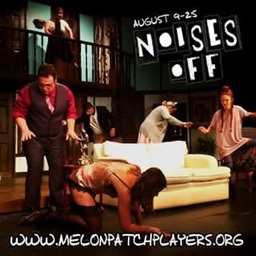 The show was booked for a three weekend run, nine performances total. After last Friday, performance number four, the guy playing Lloyd broke his arm, so for the Saturday performance the actor playing Tim stepped in to play Lloyd and one of the stage crew stepped in to play Tim. I described it as “a very sweaty performance.” It was nervewracking for sure, especially since it felt like I had just hit my stride, but the actor now playing Lloyd is delightful and I worked with him last summer on Charley’s Aunt, so I was happy to have scenes with him this time.

Tomorrow begins our last weekend of performances; I’m planning on vlogging my way through the last three shows. Stay tuned, I may have more edits to this post as we wrap up this run!

When you pick out some of your favorite books for your Anne of Green Gables inspired engagement pictures, and the prettiest cover gets chosen for the close up pictures. And then right before your wedding the author announces her next book is coming out next year! (You can add book preorders to a wedding registry, right?)
In two weeks we’ll be married!!
Less than a month till the wedding and my brain is soup. But we look so cute!!
We’re down to 40 days till the wedding! We celebrated our sixth dating anniversary with Salt and Straw and our first visit to Boma. (But we’re already planning to go back- it was SO good, and I got to see waterbucks). #2022bride #iloveyou_insco
Anne reveled in the world of color about her.
We’re starting a Lumineers cover band, I’ll play the Appalachian mountain dulcimer and he’ll play the harmonica.
When you tell your photographer you were thinking of an Anne of Green Gables vibe, and she instantly knows what you’re thinking.
We took our engagement pictures today and I’m so excited to see them!! #iloveyou_insco #selkie #greengables
Five years ago today I blew up the bank across from the sheriff’s office for the last time, and then started my journey at the Harambe Wildlife Reserve. Today, exactly five years later, I’m taking my last safari before starting a new adventure!
Happy Mother’s Day to my favorite mom in the whole world!!
Happy #maythefourthbewithyou ! Remember when I worked at Star Tours, but then I crosstrained and only picked up shifts on occasion, and then the new kids would panic because “little Caitlin” didn’t have a trainer? Good times. #88789
We guarded some galaxies! So far we’ve gotten September, One Way or Another, and Disco Inferno, but Shane is still hoping for Tears for Fears.
Happy birthday to the Hollywood that never was but always will be, and my favorite journey into the movies. There’s no place like home. #greatmovieride #disneyshollywoodstudios #disneycastmember #disneycollegeprogram #wizardofoz #dorothygalecosplay
We got engaged a year ago! And we discovered the hard way that we don’t know how to pose for photos together. #iloveyou_insco #2022bride
I said yes to the dress!! (and no, it’s not any of the dresses behind me) #tdrrealbride
#tenyearchallenge
Went on a date with this handsome guy, because this time next year we’ll be married!
“You're my kitty now. You'll have milk and tuna fish every day. And you'll only hunt mice for fun.”
How many Halloween fabrics is too many? Asking for a friend.
Was it questionable to go to work right after getting my second dose? Possibly. But I’m vaccinated!! #teammoderna #thanksdolly